So, inspired by the lovely Hemborg Wife (who was directly or indirectly, I assume, inspired by this), I’ve decided that this week is the week I do a Sunday Currently!  I can’t commit to doing them every Sunday, or even many Sundays.  Who knows what future Sundays will bring?  But for now, let’s look at Sunday, currently:

Reading: A few days ago, I started The Lake of Dreams, and I’m hoping to make some time for reading this coming week, even with the holidays.

Listening: Today was an oldies playlist sort of day, as I tried to get Theo to dance instead of getting into mischief.  It didn’t work.

Thinking: About the fact that it’s already after my bedtime, but I can’t procrastinate this since it has to be done on Sunday!

Smelling: Shampoo.  I ran out of body wash months ago, and have been using shampoo ever since…

Wishing: That we would have done the grocery shopping today, instead of putting it off

Wearing: Pajamas! Which today includes the sweatpants I bought while in labor.

Loving: The bag of mixed candy I got at Nam Nam Slik.  I hadn’t been to the candy store in months, and decided that since the Fast was over, I’d treat myself!

Needing: To cut my fingernails. I can tell when they get too long, as they slow down my super-human-speed typing, and make it uncomfortable.

Feeling: Weird.  This weekend was productive, but I feel quite worn out, which isn’t the mood I like to start my week in.  It’s also going to be a strange week, with Theo in the big daycare (because of the Easter holidays).  I’m also keeping him home one day to go into town and maybe hang out with a friend, I’m watching my nephew for a day, then it’s Andreas’s birthday, and we’ll hopefully have brunch with abovementioned friend.  I know in the grand scheme of things, it’s no big deal, but I always get a bit thrown off by changes in schedule, and extra busy-ness.

I hope everyone has had a lovely Sunday that didn’t involve as much dog poop on toddler-sneakers and spilled milk as mine!

I thought since I’m doing a 19-day fast, I might as well make a 19-month update on our Theodore!  He’s not quite 19 months yet, but he was due more than 19 months ago, so it counts! 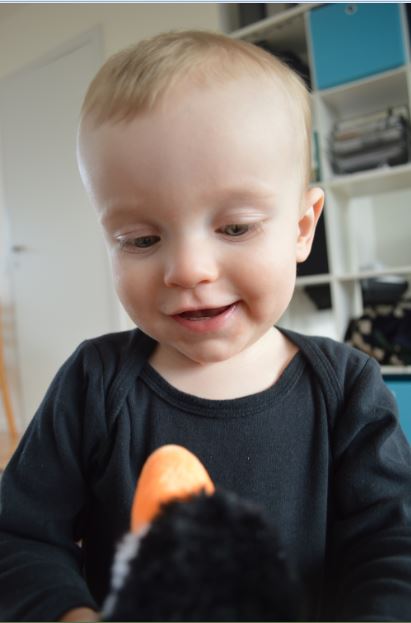 Theo is slowing down very, verrrrry slightly.  He’ll come over with a book, and back into our laps to have some reading time, and he’ll sometimes sit on the couch with us for a few minutes at a time.  That said he’s still very much a busy body, and while he usually wants one of us to be actively playing with him, we’re trying to encourage him to play more independently as well.  I was going to try to list his favorite toys, but it seems he plays with pretty much everything he has pretty routinely.  We gave him a toy kitchen for Ayyam-i-Ha which was a big hit. 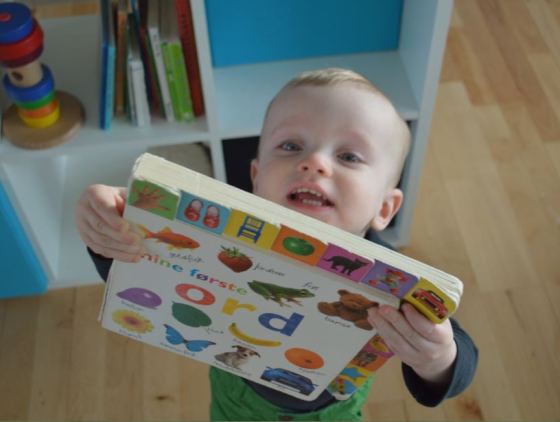 He’s loving being outside, and the weather has been sunny and spring-like lately.  He even climbed the stairs and went down a slide on his own at the playground the other day!

Theo is opinionated, but I’m getting more patient with his outbursts, and much more able to handle them effectively.  He’s getting better at listening, and I’m sometimes amazed at how quickly he understands something.  For example, recently we wanted him to stop dragging the kitchen chairs and stools around, since he was so fast, and he could easily get up on the kitchen counter (KNIVES!) or over to the half-wall by the stairwell (FALL!).  I was prepared for a long and frustrating situation, but after only a few “confrontations” he quickly understood that he may not pull the chairs around on his own, and he’s hardly attempted since.

Theodore is speaking!  He’s been slowly on the road for a long, long time, but he’s finally starting to come with words out of nowhere, and it is amazing!  I noticed it mostly yesterday, and it just bowled me over.  He’s saying: Up, help, Mama, Papa, Nanna, car, cow, bird, home, apple, and banana. 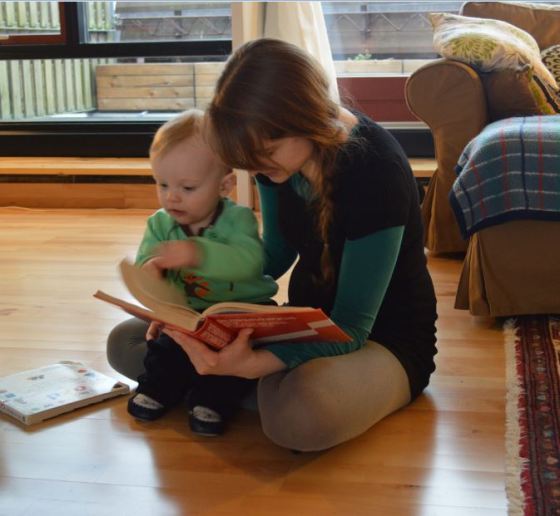 I think it has something to do with Theo speaking, and also with the fact that he’s just tipped past the one-and-a-half-year point, and that Two Years is the next big milestone, but for the first time, I’m actually feeling the “my baby is growing up so fast!”

Physically, he doesn’t seem to be growing that fast, however.  He hasn’t put on an ounce in the last six months, although I’m pretty sure he’s gotten taller, considering all the clothes that are piling up in the too-small bin.  He had his first haircut in February. 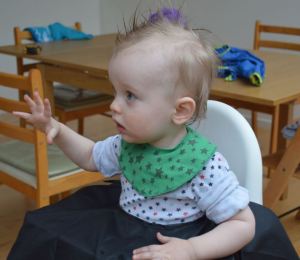 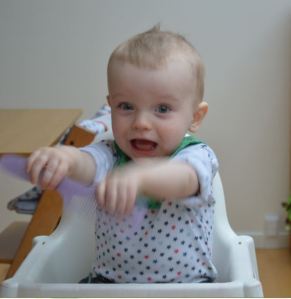 Theo is still doing great with daycare.  He’s in the guest daycare right now, as his normal caretaker is on vacation, and while he cried when I dropped him off the first several days at the new place, he’s settled in nicely.  Today, he was so eager to greet a friend that he tripped over his own foot and landed splayed out on his belly on the floor.

Eating is going really well, as it always has.  He’s eating more vegetables, and he eats rugbrød and lunchmeats at school.  He’s even started trying and eating some meats at home.  I was never worried about his protein intake, but it’s nice to know that he’s eating more diversely.  Last week I made enchiladas, and he ate the whole enchilada!  If he doesn’t happen to eat much dinner, I try not to stress about it.  Sometimes I’ll offer bread and butter, sometimes, you can just tell he’s not hungry, but it’s quite rare that Theo will get something other than what the rest of us are eating at dinner.

Keeping up with Theo while fasting has its challenges–I’ve found that that last hour or two before sunset would go a lot faster if Andreas and I could play a board game, or chill out to a TV marathon, but it sort of drags when you’re building towers, and constantly being pulled by the index finger to another location in the house to play (which is often the kitchen.  Where the cookies are.)

All in all, things are going really well.  He sleeps, he eats, he plays, and he is learning things at a mind-boggling rate.  Also, he has discovered that you can see the pictures on the back of the camera, so getting any pictures of him has gotten incredibly difficult, but I’m doing my best!

This kid is the best! 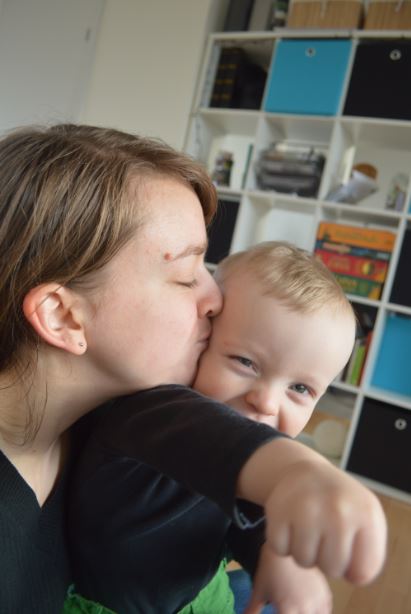 When I hear the words “comfort food” I think of a bowl of thick, creamy, saucy macaroni and cheese.  But I think that has more to do with society than myself, although now that I think about it, when would I ever say no to macaroni and cheese?  Well, except right now.  Because I’m fasting.

I’m participating in the Baha’i Fast for the first time in three years.  For the past two years, I was either pregnant, or breastfeeding, and while Theo still nurses twice a day, I felt like I was up for it this year.

It’s actually been going relatively well–better than I expected.  But one thing I didn’t expect in the first few days, was the realization of how often I use food for comfort.

When I come back from dropping Theo off at daycare, usually damp and windblown (thanks biking and Danish weather), I look desperately forward to a cup of coffee.  Job searching is nicer with a piece of toast, and I’m always excited about leftovers for lunch.  But while fasting (only eating and drinking before sunrise and after sunset), I can’t use food for comfort, or at least not while the sun is up, and it’s nice to be forced to look to other things for comfort–I’ve been saying more prayers, more fully immersing myself in hobbies, and…well…the other day I played the entire bag of Bananagrams by myself.  I’m hoping that, even after the Fast is over, I’ll remember some of these other things that give me comfort–and maybe not always turn to the cookie jar.

But I have to say that, as much as I’m trying to get out of this Fast, and as happy as I am to be participating in it, I’m also looking forward to lunch…next weekend.